In the card inventory You keep all troop cards You during the game. Troop cards is awarded if the player has successfully conquered at least one country during a turn.

There are 3 kinds of troop cards. 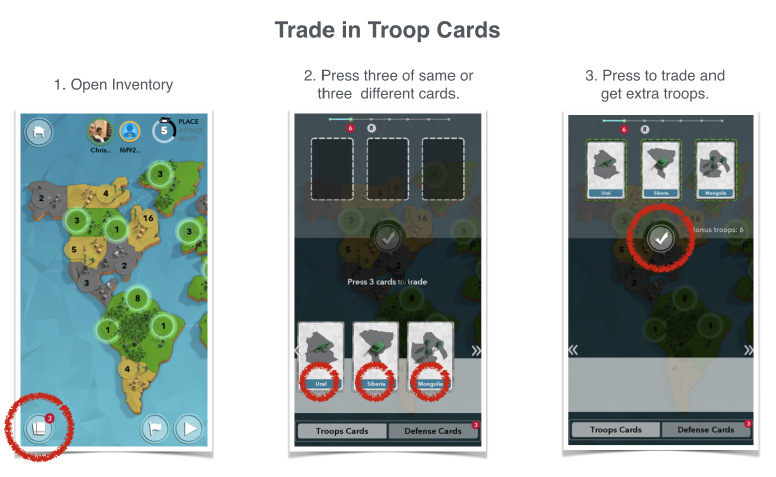 No more than one card may be awarded per turn. Each time You win an attack over a country You win a troop card. If You are lucky You can also win a bonus troop card upon completion of a turn. Troop cards CANNOT be purchased.

If a player collects either three cards with the same symbol, or one of each, or two different and a wild card, they may be traded in for troops at the beginning of a player's next turn. In order to trade troop cards, press the 3 cards You want to trade in the inventory.

You can only use the wild card together with 2 country cards.

The first set to be traded is worth 4 troops; the second is worth 6; third, 8; fourth, 10; fifth, 12; sixth, 15 and the seventh 20. The number of troops received in latest trade by any player is shown in the trade bar red number which moves every time a set is traded in.

In the second section in the inventory You can find Your defense cards. Defense cards can be won at the end of a completed turn or purchased with coins. 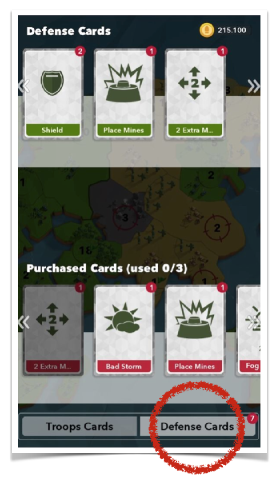 To use a defense card

Press the card in the inventory and select country to place the card in.